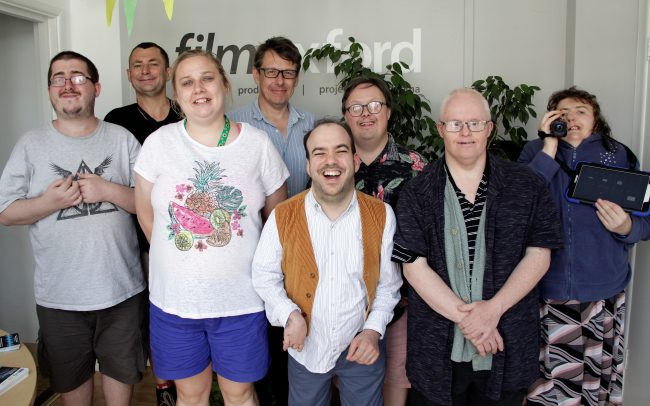 It has been an amazing few years for us. Last year we got our own website, exhibited Rising at Modern Art Oxford and Old Fire Station galleries to fantastic reviews, and Russell Highsmith from the group had sell-out performances of his comedy play Singles Night at the Old Fire Station theatre. You can download the Rising publication and the Rising report from our website.

This year we are celebrating our 10-year anniversary. The Shadowlight Artists were founded in 2009 by local arts and education charity Film Oxford who have supported us ever since. Our group now includes painters, performance and installation artists, animators, photographers and a playwright. We control our own creative development with support from Film Oxford who provide mentoring, technical input and a supportive environment.

Over the last decade we have had critical success in the UK and internationally. Recently our member Danny Smith, who paints and performs, had his dance film Time to Leave screened as part of Agite Y Sirva (Shake & Serve) a professional ‘videodance’ festival in Mexico. The film will also tour in North, Central and South America later in 2019-20 as part of the festival. Richard Hunt, a painter and mixed media artist, has a film screening in three major Brazilian cities (Rio de Janeiro, Sao Paolo and Brasilia) this autumn as part of Assim Vivemos (Living This Way), an international disability film festival.

The group also have work screening in October in Brighton at Oska Bright, the largest learning disability film festival in the world; Danny Smith’s dance film is being screened, Wallingford-based photographer Mark Hemsworth has a documentary about his work showing, and the festival is also screening a collective film made by us featuring live action and animation, called Undersea Adventure.

We have also recently been awarded funding by the Arts Council of England for a project provisionally called Luminous to create new work over the next 12 months and exhibit it at Modern Art Oxford, the Old Fire Station and other venues in autumn 2020. The Arts Council funding covers 90% of the project’s costs, we are currently seeking additional funding or sponsorship for the remainder of the budget. We have been meeting at Film Oxford over the last few weeks to plan our new individual projects and group work with the project’s Artistic Advisor Chris Oakley, with the production period running from October for 12 months.

We will keep updated with developments in the near future.